This incredible brand is an exciting leader in the movement to maximise refrigeration energy efficiency, maintain food quality, and lower heat and noise output.

To celebrate we thought we’d share a little of the history of this innovative brand.

The future of sustainable kitchens was founded in 1901.

Industrialist Hans Gram constructed a 100 square meter engineering works called “Hans Gram Engineering Works” near to where the present Gram factory lies in Denmark. It began trading dairy supplies and operating as a fitting and service business for dairy farms. Gram began to manufacture complete machines for dairy plants including (among other things) refrigeration. By 1907, Hans brother Aage joined the firm following his mechanical engineering studies and the company was renamed “Gram Brothers Engineering Works.”

Out of the dairy and into the fridge

After the first world war there was a major shift in the way people lived their lives. Gram production reorganisation ensued following the region being reunited with Denmark. In 1920 The brother’s decided they should move the focus away from dairy equipment and concentrate on developing a refrigerator factory. One of their first moves was to design and produce their own compressors. 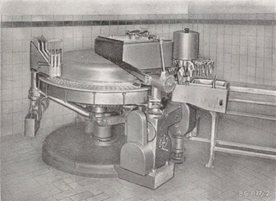 BF-30 The “forefather” of professional fridges and freezers

in the 50’s and 60’s BF-30 was a machine ahead of it’s time. It was the first freezer developed for bakers and went on to change the typical baker routine. Because the cabinet allowed bakers to store their pre-proven dough, it spread baking times more evenly over the day or week. Now they were able to offer freshly baked bread until close.

Two cabinets each with a 230L volume acted as separate compartments with two half doors. Each compartment could be temperature controlled separately and was equipped with 15 pivoted tray holders.

Fridges for the masses

Mass production of both domestic and commercial fridges and freezers begins. Aage Gram’s children lead the company forward following his death in 1957. Hans Gram and Maren Nybroe were at the helm.

The first fridges and freezers intended for cold storage in professional kitchens and catering companies. Fitted with cold air distribution grilles, self closing door, and magnetic sealing strips to help minimise cold loss. Other features included a pedal door opener, fully auto defrosting and re-evaporation of defrosted water, and a “quick freeze” button. KG 730 had a rated energy consumption of 3.2 kWh per 24hrs.

Through the 80’s demand grew

With the 80’s came Generation 2 Gastronorm 80 and Maxi 80 cabinets with gastronorm sizes. The KP 720 was a special model process refrigerator designed to rapid cool small portions from 65 degrees to 10 degrees within three hours. It was the model that would lead to today’s KP 500 and 660 quick chillers. Demand was growing due to changed eating habits and an increased need for ‘ready-made’ meals. More people were eating out, and professional kitchens were seeking out commercial refrigerators and freezers.

Gram’s unique air distribution system is introduced, with cabinets designed with an air duct in the rear wall to help keep uniform temperature within. These cabinets were the first to be fitted with electronic controls with features such as automatic emergency programs, visual alarms and safeguards against unauthorised persons setting the temperature incorrectly.

A sale, a turnaround and a 100yr celebration

The Gram family foundation sold the company to VT Holding A/S in 1999 after prolonged turbulence. Gram Commercial A/S is born as an independent subsidiary within the Gram Group in 2000. In 2001 the Gram Group celebrate their 100 year anniversary with a bright future ahead of them.

2000-2005 saw heavy investment in modern production equipment and new lines boasting an energy efficiency never before seen. In 2008 Gram was acquired by Japanese company Hoshizaki Electric Co. Ltd – the worlds largest manufacturer of ice makers for the European food industry. The same year Gram Commercial released a completely new type of cabinet. Compact 610 was a hybrid between plastic interior and stainless steel cabinets. Sold in a white or stainless steel finish with an insulated or glass door.

In 2002 Gram through their research and development program and began substituting toxic HFC refrigerants with all natural hydrocarbon gases. This is a major contribution to the environment and the future of sustainable commercial kitchen operations.

2016 Gram perfected the design of single door cabinets with their ECO and SUPERIOR series taking the market by storm. They continue their great strides, delivering the future to our kitchens.

90% of all Gram products are developed and produced in their Denmark factory, close to the 1901 site where it all began. 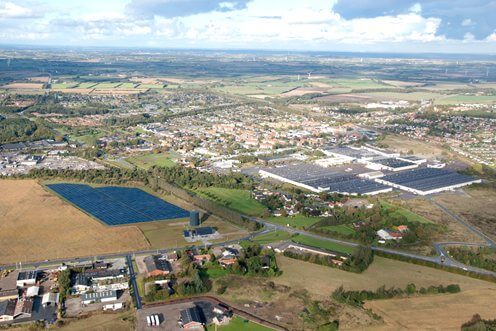 In this image Gram Commercial can be seen on the right. The solar farm on the left provides energy to heat the factory.